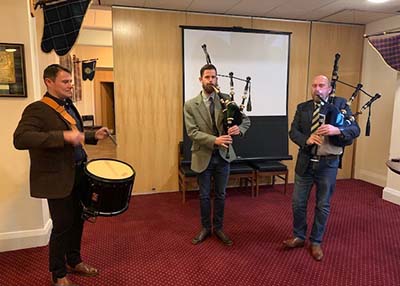 On Saturday 23 October 2021, 10 years since the deployment of Op HERRICK 14, 60 personnel who were deployed as part of the 4 SCOTS Battle Group gathered in Redford Calvary Barracks for a reunion to mark the 10 year anniversary. Invites were sent to people from the Sgts’ Mess and Officers’ Mess members, including attached Arms, at the time of the tour. Although many could not attend due to work commitments, a great night was had by all and we hope to catch-up with everyone again in a few years. An even split of serving and now veterans reunited to share memories and exaggerated stories from the tour and more importantly, catch-up and check-up on each other in a relaxed environment.

The Edinburgh GSM kindly authorised use of his WOs’ and Sgts’ Mess in Redford Calvary Barracks (RCB) for the reunion. Due to COP 26 utilising RCB we were very fortunate to have been given the infrastructure, a public thank you to Edinburgh GSM, WO1 Gibson for his support. All the staffing RCB who assisted with accommodation, feeding, bar staff, MEP sentry were very accommodating and made the event run smoothly.

We were very fortunate to have two of the best Pipers on the night, Senior Pipe Major MacGregor and Pipe Major Grant, who provided fantastic musical entertainment on call; CSgt Gibson made a cameo with the snare drum, well done and thank you to all three. A collection of photos and videos from the tour were played on a slideshow throughout the night, there were many photos which never made the final cut but all raised a laugh and brought back great memories!

RHQ very kindly funded the cost of the night, a very nice curry was enjoyed by all. After dinner, we toasted The Regiment and absent friends.