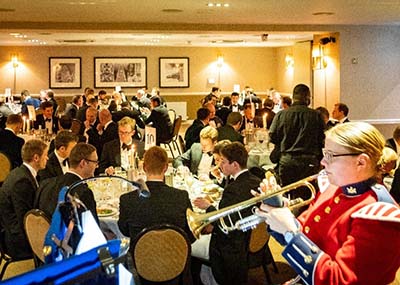 On Thursday 7th October 2021 some ninety of the Regiment’s officers gathered in Edinburgh at the Royal Scots Club to attend the annual Officers’ Club dinner.  As one of the first post COVID lockdown events it was good to see such representation from across the Regiment, including the Regiment’s first two commissioned female officers. Spirits were high and the table conversation ranged from strategy and doctrine at the top table down to Instagram followers with the young team. The Colonel of the Regiment’s address was particularly inspiring, everyone should take great pride in the standard of officers and soldiers in the Regiment and their achievements within the military landscape.

The food, wine and service from the club was first class and the entertainment were provided by the SCOTS Band and pipers from the Army School of Bagpipe Music and Highland Drumming. Of note was the inaugural rendition of the Regimental Pipers Toast and the real serenity in the room brought about by a quite excellent Piobaireachd.

The dinner night was a huge success and as the night came to an end many officers went on to sample the delights of what Edinburgh has to offer culturally.   The next dinner is planned for the 17 March 2022 and its hoped that a similar level of support for this event will be forthcoming.