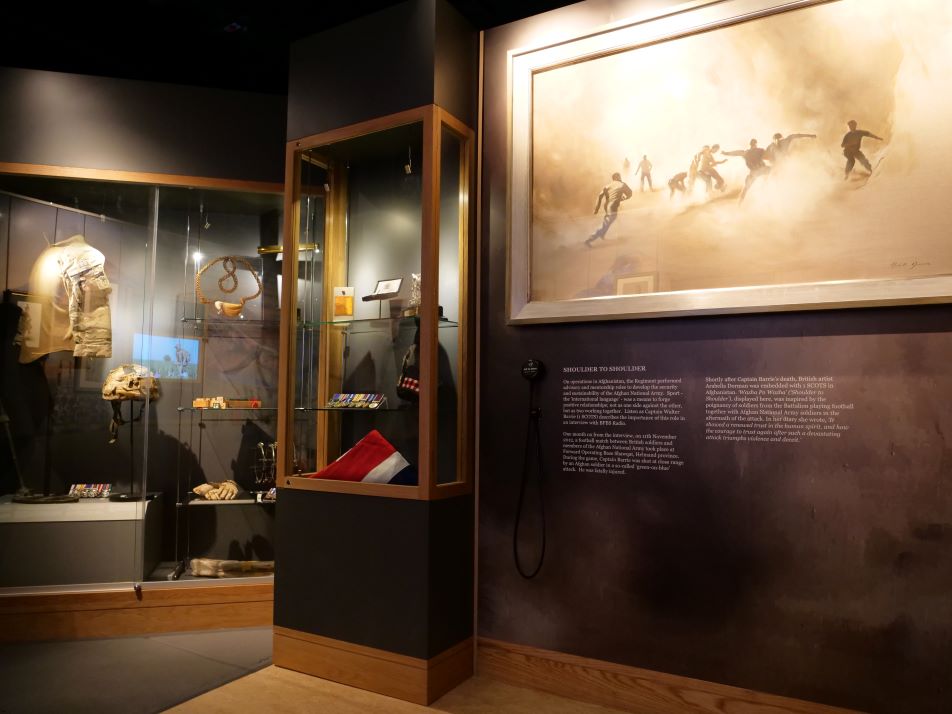 Two years since it’s doors last opened to the public, the Museum of The Royal Regiment of Scotland has welcomed visitors back this month.

The Museum, based in Edinburgh Castle, closed in 2020 as part of the national lockdown and has suffered subsequent delays to reopening due to ongoing building repair works. Telling the story of The SCOTS from formation in 2006 to present day, it now boasts a new, modern look following refurbishment during the extended period of closure.

New displays reflect on the impact of The SCOTS’ longest operational campaign, in Afghanistan, following withdrawal from the region in 2021 after almost 20 years. Highlighting the key qualities of education, innovation, leadership and resilience, each story reminds visitors of the people behind the objects. The recently acquired ‘Shoulder to Shoulder’ painting by British war artist Arabella Dorman takes centre stage, set beside a dedicated memorial space holding items on loan to the Museum from families of fallen SCOTS.

A Military Cross medal group, a pair of life-saving gloves and a Fijian ‘tabua’ necklace are among other collection pieces making their debut as the Museum sees its regular exhibition space increase by more than three times its previous size. It also sees the introduction of a seasonal display which will regularly alternate to feature special items and temporary exhibitions. To celebrate the return of the Edinburgh Military Tattoo this year, the first display celebrates the Regiment’s rich musical heritage.

The Museum is grateful for the support of the Regimental Trust and Army Museums Ogilby Trust, without whom the refurbishment work would not have been possible.

The Museum of The Royal Regiment of Scotland is co-located with The Royal Scots’ Regimental Museum in Edinburgh Castle, open daily from 9.30am-4.30pm. Due to the size of our small team these hours may be subject to change at short notice. We recommend following our social media channels for up-to-date news and opening information. Serving and ex-members of the Regiment are encouraged to get in touch with the Curator to arrange a visit or view objects of interest not currently on display.