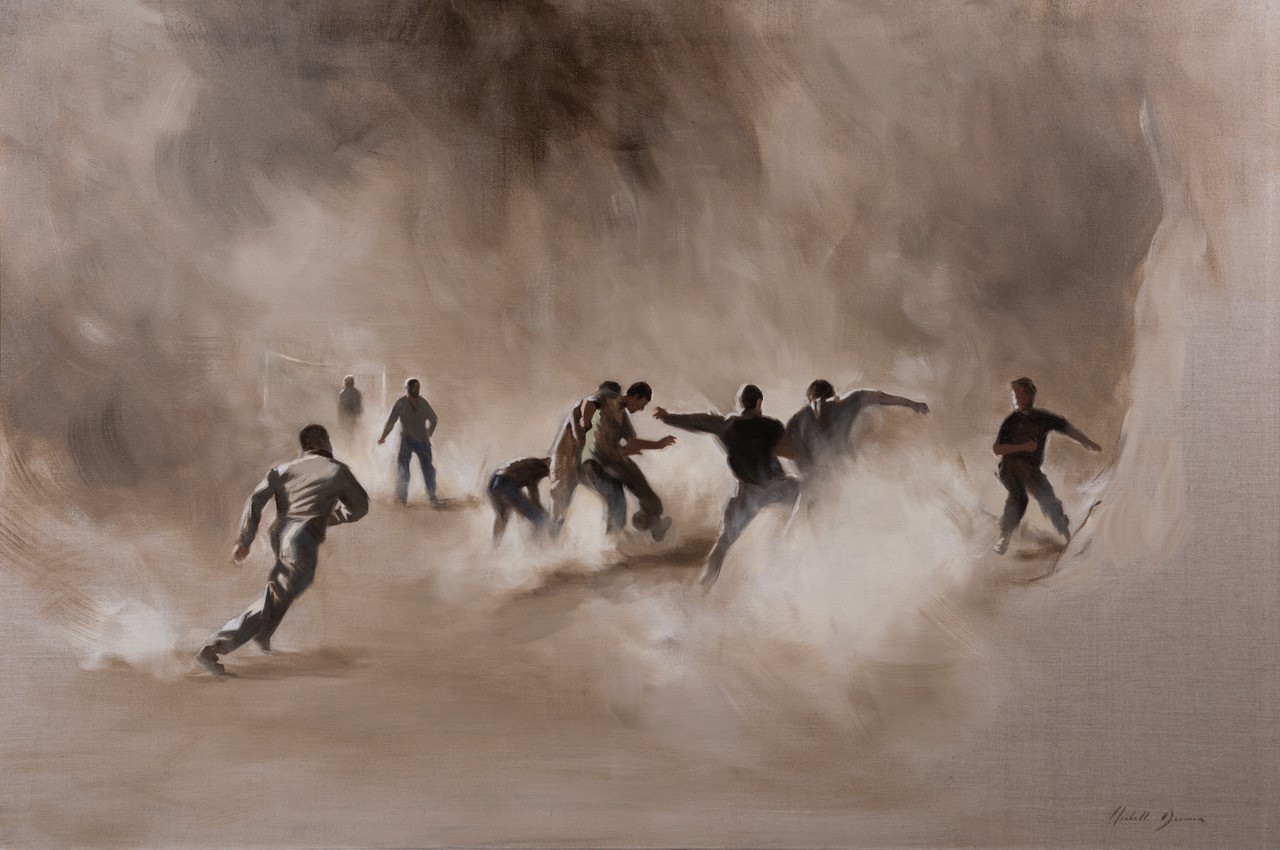 The Museum of The Royal Regiment of Scotland is delighted to announce the recent purchase of an oil painting titled “Wazha Pa Wazha” (“Shoulder to Shoulder” in English) by British war artist Arabella Dorman. Captain Walter Barrie (1 SCOTS) was taking part in a football match between British soldiers and members of the Afghan National Army at Forward Operating Base Shawqat in the Nad ‘Ali district of Helmand province when he was shot at close range by a member of the Afghan National Army (a so called “green on blue” attack). He was fatally injured in this attack, which took place on Sunday 11 November 2012.

Shortly after his death, Arabella was embedded with 1SCOTS in Afghanistan and found it poignant to see soldiers from the Battalion playing football with Afghan National Army soldiers in the aftermath of the attack. An extract from her diary at the time (included below) explains the inspiration behind the painting.

Within a few hours we were out on patrol again, going down to another checkpoint, run by a clean-shaven Commander, sweating in his puffy jacket in the warm afternoon sun. After the usual tea, boiled sweets and other niceties, I left the Commander to his strategic conversation to watch the men play football. ANA against ISAF, swirling dust kicked up in the late afternoon light, confused, swirling silver-gold dust that seemed to shroud and almost obscured the goal and players alike. The Commander presided above the game, raised up on a sandy outcrop against the Sangar. It was emotive and inspiring to watch these men playing together, when only a few years earlier both sides were fighting a fierce insurgency in a viper’s nest of death, murder and corruption, where both ISAF & ANA Forces could do little but retreat behind the wire for a degree of security. And today, here, these men are playing this timeless game in an area where once they could not move. I sketched them thinking it will make a powerful symbolic painting, representing a bridging of division between ISAF & the ANA, but also, more importantly a tribute to Walter Barrie, killed whilst playing football by a young Afghan soldier he had been teaching and mentoring. That play has resumed is a profound credit to our men, their courage, professionalism and willingness to return to the field again…”

This painting is an important acquisition for the Regimental Museum because apart from the association with Captain Walter Barrie and the war in Afghanistan it also touches on other important themes such as remembrance, reconciliation, and the power of sport. We are hoping to have the painting and a selection of items associated with Captain Barrie on display in the Regimental Museum at some point in 2022. The purchase of this painting was only made possible by the very generous support of the National Fund for Acquisitions.